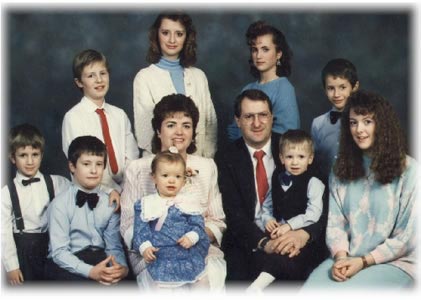 Before Truehope... the beginning

Ten children were left motherless the cold January day that Debbie took her own life. She had been suffering the pains of Bipolar Affective Disorder (BAD) for years and finally succumbed to the dark and irrational side of the disease. Somehow, out of the sheer agony and crushing pain of her loss came a determination for Anthony her husband. He began a prayerful and desperate search to find hope and health for their children who were also ravaged by the disease. At the time of her death, two of Debbie’s children had also been diagnosed with BAD. As a desperate father, and after exhausting all known medical routes, Anthony sought the help of a friend. Together these two men established a program of nutritional supplementation that would eventually lead to the recovery of Anthony’s children and the formation of The Synergy Group of Canada Inc. – a non medical research group dedicated to researching and overcoming the disorders of the central nervous system. Debbie's tragic death had initiated that series of events which would change the grim picture of mental illness forever.

Joseph Stephan exhibited signs of attention deficit disorder as a child. By the time he entered puberty, the symptoms were escalating into panic attacks, delusions and violent fits of rage. Ultimately, he was diagnosed with BAD shortly after Debbie’s death.

Joseph was first treated with lithium, an element used to make batteries, which caused severe side effects. When he refused to take it, he lapsed into severe mania and panic within a couple of days.

Then, on January 20, 1996, Joseph started using the nutritional supplementation program created by his father. The results were dramatic and immediate. Within four days he was off the lithium; within two weeks, his mood and emotional control improved immensely. In the years since, he has maintained his well being and has had no recurring symptoms of BAD.

Autumn Stringam's recovery is, if anything, more dramatic than her brother's. At 12, she showed signs of suffering from Bipolar Disorder, a condition which deteriorated throughout her teens. She married Dana, had a child at 20, and was subsequently diagnosed with Bipolar Affective Disorder I with rapid cycles; a daily seesaw of mania and depression. Those eventually gave way to regular visual and aural hallucinations and the belief her husband and other family members were conspiring to kill her. These visions often led her to act out violently.

Following a particularly terrifying episode, Autumn was admitted to a psychiatric ward. After many adjustments to her medications, she was released a few weeks later. Drugged and with her cognition impaired, she "broke through" her medications frequently and was extremely unstable.

After threatening suicide, she was again hospitalized. Upon release, she was taking a pharmaceutical cocktail of Haldol, Rivotril, Ativan, Epival and Cogentin, a combination that failed to control her psychosis. She continued to rapid cycle.

Told Autumn would require round-the-clock adult supervision, Dana took her to her father to begin the alternative treatment, which had helped Joseph. Within four days she was forced to eliminate Haldol and Rivotril because of the drastically increasing side effects. Ativan was no longer required when hallucinations ceased. After one week on the program, she returned home to her husband. Less than a month later, she reduced, then eliminated, the mood stabilizer Epival. Her only "medication" now was the nutrient supplement which would become Empowerplus.

Autumn's recovery exceeded the expectations of her psychiatrist, doctor and family. The woman who was expected to remain a prisoner of BAD, confined by a medley of psychotropic drugs and pursued by thoughts of suicide for the rest of her life, continues to be healthy and stable to this day.

But perhaps even more compelling is how Autumn, once counseled to be sterilized after the birth of her son, gave birth in 1999 to a happy, healthy daughter, and again in 2001 and 2003 to two more healthy daughters!

"My life is a miracle and an example for all who suffer," she says now. "There is hope, healing and ultimately, health for all who seek it; there is an alternative to despair." Autumn spends her time raising her four wonderful children, remains happily married to Dana, her beloved husband and volunteers for her church and community. Hers is a parable of hope to those who follow her footsteps.

Click here to read more about Autumn's story, as well as video interviews, magazine articles and especially Autumn,s book, "A Promise of Hope"!

Reflections of Faith and Hope

Anthony Stephan, in reflecting on the marvelous recovery of his children, said; "Truly God has answered my pleadings and intense prayers with a great blessing." Hundreds of participants have borne that same witness and acknowledged the hand of God in bringing restoration to their life or that of a loved one. Hence, we have named this web site "TRUEHOPE" because we believe that true hope can only be found in the healing sustenance that God has provided for us. No man or company or science can ever replicate or replace that which our Creator has provided for us. In seeking to treat the symptom, we have all ignored the Source.