At Truehope Nutritional Support, we have many inquiries from health professionals about EMPowerplus Advanced, the Truehope Support Program, and our research projects. We welcome the involvement of all medical practitioners who want to help their patients achieve and maintain mental and emotional health.

We invite you to take a moment and review the current literature regarding the use of micronutrients for mood disorders. There is a growing body of evidence that suggests that micronutrient interventions such as EMPowerplus Advanced may be the most effective approach to certain mood disorders.

Truehope has published a comprehensive package for health care professionals that is designed to answer any questions you may have regarding EMPowerplus Advanced and the nutrient protocol for its usage. Please call us at 1-888-TRUEHOPE (1-888-878-3467) for more information on how to obtain your copy.

Join an ever growing number of health professionals who connect their patients with Truehope products for balanced mental health and well-being.

For more information or to receive your health professional guide and other educational information please fill out the following form, call 866-397-3795 or fax 866-310-0931.

The Truehope Support Program provides support for both users of the nutritional micronutrient treatment, EMPowerplus Advanced, and their doctors. The Truehope Support Program’s goal is to share what we have learned through experience and with the guidance of qualified research advisors, in order that all who choose to use EMPowerplus Advanced may do so safely and as successfully as possible.

- An individualized reporting system for users, in the form of on-line standard psychiatric reporting charts, for you to access and monitor.

- A website for registered EMPowerplus Advanced users, my.truehope.com, with an online support group message board and more detailed information about the program.

The product, systems, and protocol are the results of university and field research. Each has been designed using our experience and the knowledge of qualified research advisors.

We can provide Healthcare Professionals with our EMPowerplus Advanced Professional Guide upon request. This guide will tell you about our protocols and many other important topics. Click here to request your copy.

You can reorder Truehope products online once you are an authorized carrier. Just go to the Truehope store and sign in with your credentials to receive your exclusive medical professional discounts.

Many studies have been conducted -- with interesting results -- showing the relationship between nutrients and mood.

Research shows it is clear that no one single nutrient (with the exception of lithium) can provide a reliably effective treatment for mood disorders. Rather, the evidence implies that a broad range of nutrients are involved in achieving optimum mental stability:

Various micronutrient-related factors are associated with increased risk of psychiatric illness, and micronutrients play essential roles in an array of brain functions that have been implicated in mood lability. Micronutrient inadequacy may impair one or more of these critical brain functions and result in psychiatric symptoms. The micronutrient-mood regulation mechanisms discussed in this review are not exhaustive, nor are they mutually exclusive; in fact, they may be complementary. For example, neurotransmitter production and regulation, key components of the monoamine or chemical imbalance hypothesis of mood disorders, may work in tandem with neurite outgrowth and gene expression of neurotrophic factors, elements of the network hypothesis; these hypotheses appear to be entirely complementary.28

Intestinal disruption and lack of absorption

Research is uncovering major genetic risk factors in psychiatric illness.31 Up to one-third of gene mutations result in decreased enzyme binding affinity for corresponding coenzymes, including vitamins and minerals.32 As a result, individuals with certain genotypes may have significantly higher requirements for essential micronutrients in key mood-related brain pathways.32 33 44

Low micronutrient intake may contribute to psychiatric illness.34 35 36 Intake of many micronutrients is inadequate in the United States, as shown in Figure 2. RDA levels are deemed to be "sufficient to meet the dietary requirements of nearly all (97 to 98 percent) of healthy individuals", but do not ensure mental health for at-risk sub-populations:13 "intake at the level of the RDA or AI would not necessarily be expected to replete individuals previously undernourished, nor would it be adequate for disease states marked by increased requirements."37

Micronutrients play key roles in regulating neuronal transmission. Zinc is extensively involved in synaptic transmission,45 46 both excitatory and inhibitory.47 In certain brain regions, vesicular zinc is co-localized and co-released with glutamate, modulating the function of a number of channels, receptors, and transporters,48 49 including NMDA receptors.50 Magnesium and copper are important modulators of NMDA-receptor activity, which has been implicated in the pathogenesis of mood disorders.51 52

Hypomethylation has been reported as a major risk factor for schizophrenia and bipolar disorder.53 Hundreds of methylation reactions occur in the body, including during DNA, RNA, and neurotransmitter synthesis. The neuropsychiatric effects of folate and vitamin B12 deficiencies result from defective methylation processes.54 55 Folate is a precursor to S-adenosyl-L-methionine (SAMe), a methyl donor that has been shown to have antidepressant properties.56 Choline is also major source of methyl groups for methylation reactions,57 and has been reported to enhance symptoms of patients being treated with lithium.58

Deficiency of folic acid, niacin, vitamin B6, vitamin B12, vitamin C, vitamin E, iron, or zinc (one or more of which is seen in half the US population59) have been shown to mimic radiation in causing single- and double-strand DNA breaks, which could decrease enzyme affinity for nutrient cofactors.60 61 Folate deficiency of a magnitude seen in 10% of the US population breaks chromosomes by causing massive mis-incorporation of uracil into human DNA.59 In addition, various vitamin and mineral deficiencies have been shown to accelerate mitochondrial decay, leading to DNA damage.62

What makes EMPowerplus™ so effective?

To understand what makes EMPowerplus™ so effective for bipolar, depression, and other mood disorders, it’s important to recognize the relationship between micronutrient deficiencies and the incidence of mental illness. For example, research on the role of zinc in depression showed that levels of zinc in the blood of depressed subjects was significantly lower than in controls.

Could micronutrient deficiencies be affecting your mental health?

Despite efforts to eat a balanced diet with healthier food choices, this graph from the USDA shows most Americans do not meet the Recommended Daily Allowance (RDA) for many essential micronutrients. This may be one reason why the incidence of mental illness and mood disorders such as bipolar continue to rise at an alarming rate. 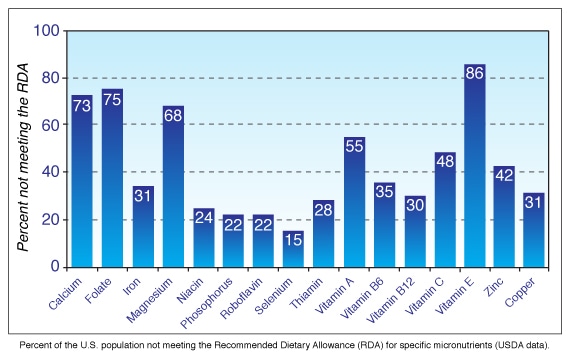 The good news? Current research suggests many symptoms of bipolar, depression, anxiety, and ADHD can be reduced or eliminated using the full-spectrum micronutrient formulation of EMPowerplus.

The role of serotonin in mood stability

The “feel good” neurotransmitter serotonin plays a critical role in mood regulation. Most pharmaceutical treatments for depression are known as Selective Serotonin Re-uptake Inhibitors, or SSRIs, and are supposed to keep the mood-balancing effects of serotonin working in the brain longer by blocking its re-absorption in the body.

A better way to look at the role of serotonin is to understand how the body creates this essential neurotransmitter. The following diagram details the chemical reactions the body must go through to produce serotonin and demonstrates that:

The result? Your mood improves and you feel better.

Micronutrient deficiencies can prevent production of other natural chemicals 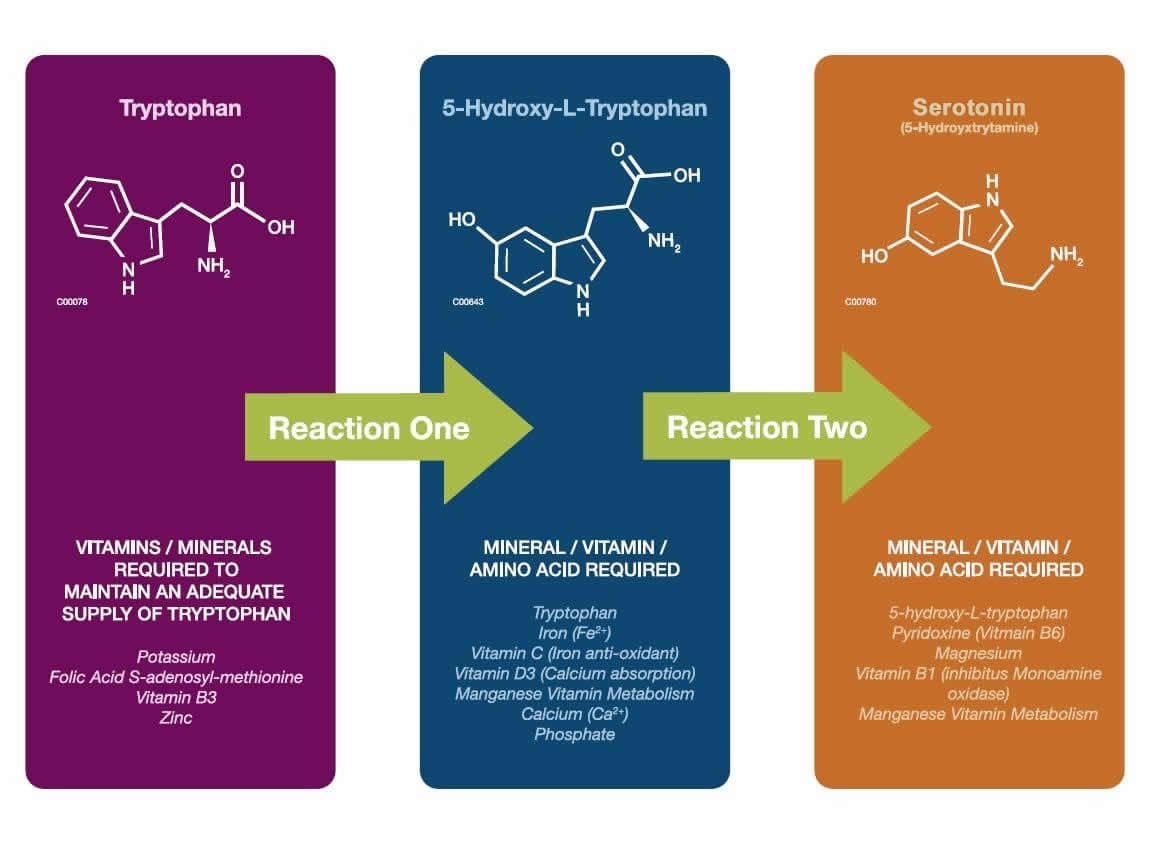